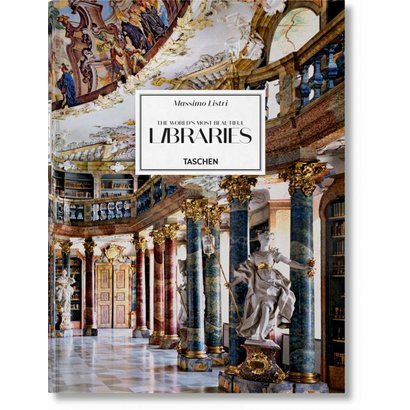 
Bibliophiles, rejoice! In this rapturous photographic journey, Massimo Listri travels to some of the oldest and finest libraries around the world to celebrate their architectural and historical wonder. From medieval to 19th-century institutions, private t

From the mighty halls of ancient Alexandria to a camel bookmobile on the Kenyan-Somali border, human beings have had a long, enraptured relationship with libraries. Like no other concept and like no other space, the collection of knowledge, learning, and imagination offers a sense of infinite possibility. It's the unrivaled realm of discovery, where every faded manuscript or mighty clothbound tome might reveal a provocative new idea, a far-flung fantasy, an ancient belief, a religious conviction, or a whole new way of being in the world.

In this new photographic journey, Massimo Listri travels to some of the oldest and finest libraries to reveal their architectural, historical, and imaginative wonder. Through great wooden doors, up spiraling staircases, and along exquisite, shelf-lined corridors, he leads us through outstanding private, public, educational, and monastic libraries, dating as far back as 766. Between them, these medieval, classical, baroque, rococo, and 19th-century institutions hold some of the most precious records of human thought and deed, inscribed and printed in manuscripts, volumes, papyrus scrolls, and incunabula. In each, Listri’s poised images capture the library’s unique atmosphere, as much as their most prized holdings and design details.

Featured libraries include the papal collections of the Vatican Apostolic Library, Trinity College Library, home to the Book of Kells and Book of Durrow, and the priceless holdings of the Laurentian Library in Florence, the private library of the powerful House of Medici, designed by Michelangelo. With meticulous descriptions accompanying each featured library, we learn not only of the libraries’ astonishing holdings—from which highlights are illustrated—but also of their often lively, turbulent, or controversial pasts. Like Altenburg Abbey in Austria, an outpost of imperial Catholicism repeatedly destroyed during the European wars of religion, or the Franciscan monastery in Lima, Peru, with its horde of archival Inquisition documents.